Acting District Attorney Gonzalez said, “Our Begin Again initiative has been a tremendous success in helping thousands of New Yorkers resolve their outstanding summonses. I am committed to giving the people of Brooklyn a new start by helping them remove the threat of an arrest and other negative consequences associated with an open summons warrant. I encourage everyone, including members of our immigrant communities, to take advantage of this program, which also fosters trust between law enforcement and the communities we serve.”

Congressman Hakeem Jeffries said, “Everybody deserves a second chance at life. Acting District Attorney Gonzalez and all involved should be commended for their vision and commitment in making this happen for thousands of deserving individuals across Brooklyn.”

New York City Public Advocate Letitia James said, “In New York City, a simple non-violent offense can snowball into an arrest, and reduce the chance of getting work and access to public housing. Begin Again offers New Yorkers the chance to wipe the slate clean and reclaim their lives by clearing up open summons warrants. I wholeheartedly support this initiative and urge anyone eligible to participate, particularly undocumented immigrants.”

New York City Council Speaker Melissa Mark-Viverito said, “Summons warrants the vast majority of people don’t even know they have can turn an otherwise normal day into a nightmare trip into custody. I applaud the Brooklyn DA’s Office for providing an opportunity for New Yorkers to resolve these warrants for low-level offenses without wasting law enforcement resources. Between the Begin Again program and the City Council’s recent initiative to clear summons warrants issued more than a decade ago, our communities can look forward to a fairer criminal justice system.”

Council Member Robert Cornegy said, “We know an open summons or warrant may impede one’s ability to obtain employment, housing, or affect their immigration status. In Brooklyn, these warrants accumulate at a rate of approximately 16,000 per year. The opportunity to clear one’s name will greatly reduce these numbers and bring people out of the shadows. The Begin Again event is a valuable way of providing a second chance for low-level offenders, fosters better community relations with the NYPD, while reducing an overcrowded jail population. We appreciate the Brooklyn DA’s office for returning to Bedford-Stuyvesant to help all New Yorkers.”

Since its launch in June 2015, Begin Again has been held in Clinton Hill, East New York, Bedford-Stuyvesant and Bushwick. Nearly 2,600 people attended those previous events and over 1,700 warrants were cleared. Everyone who showed up received help and no one was arrested. Following the initiative’s success in Brooklyn, similar events have been held in other boroughs.

The District Attorney’s Office is partnering with the Office of Court Administration, the Legal Aid Society, the Kings County Criminal Bar Association and the New York City Police Department to once again provide on-site legal counsel and give New Yorkers a chance to clear their outstanding warrants.

Individuals who appear for Begin Again will first consult with on-site attorneys to make sure only eligible summons warrants are heard. All participants will then enter a makeshift courtroom, where a judge will be on hand to address the outstanding summons and bench warrants that resulted from the failure to respond to summonses for a multitude of low-level infractions, including walking a dog without a leash or being in a park after closing.

There are approximately 1.5 million open summons warrants citywide. These summons warrants, when left unresolved, subject those who have them to an automatic arrest when questioned by police on the street or during a traffic stop. They also carry a number of negative consequences, including impeding one’s ability to apply for citizenship, secure employment or obtain public housing. In today’s immigration enforcement environment by the federal government, an open warrant can be particularly risky to undocumented immigrants.

The Brooklyn District Attorney’s Office is committed to keeping Brooklyn safe and fair for all and will continue to expand its Begin Again event to other locations throughout the borough and to offer other solutions that would relieve the staggering backlog of outstanding summons warrants.

More information about the event is available at http://brooklynda.org/begin-again/ 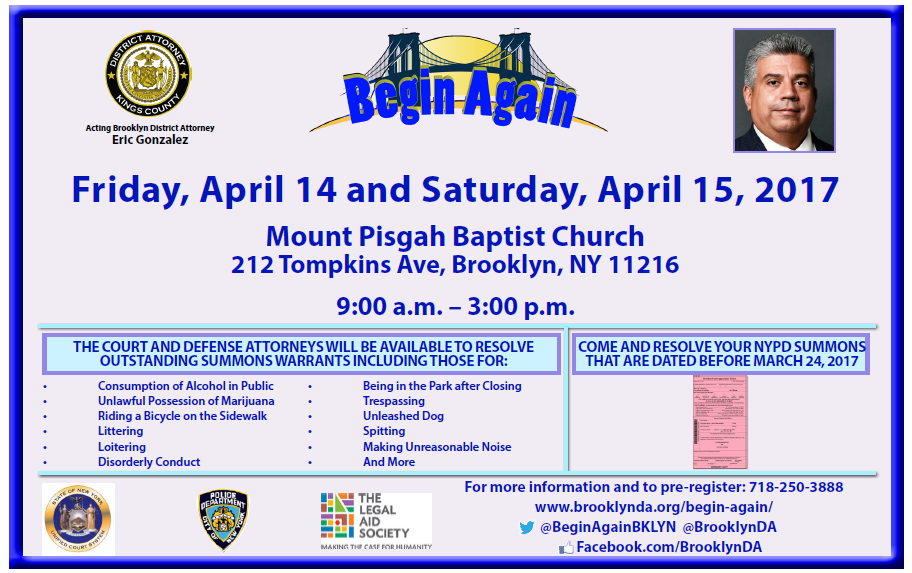