The Post-Conviction Justice Bureau is the first stand-alone bureau of its kind in the nation. It is anchored by the nationally recognized Conviction Review Unit and includes two Units: A Parole and Clemency Unit charged with implementing new policies governing the Office’s participation in parole and clemency proceedings for incarcerated individuals, and a Sealing Unit to encourage and facilitate applications to seal criminal convictions.

The Post-Conviction Justice Bureau is also charged with studying and facilitating opportunities for reviewing excessive sentences.

The Marshall Project: Took a Plea? Brooklyn’s District Attorney Will Support Your Parole

One of the keys ways that the Brooklyn DA’s Office ensures fairness and public safety is through our Conviction Review Unit (CRU). Expanded and revamped in 2014, Brooklyn has the largest dedicated unit in the country tasked with reviewing old cases in which credible claims have emerged that people may have been wrongfully convicted. 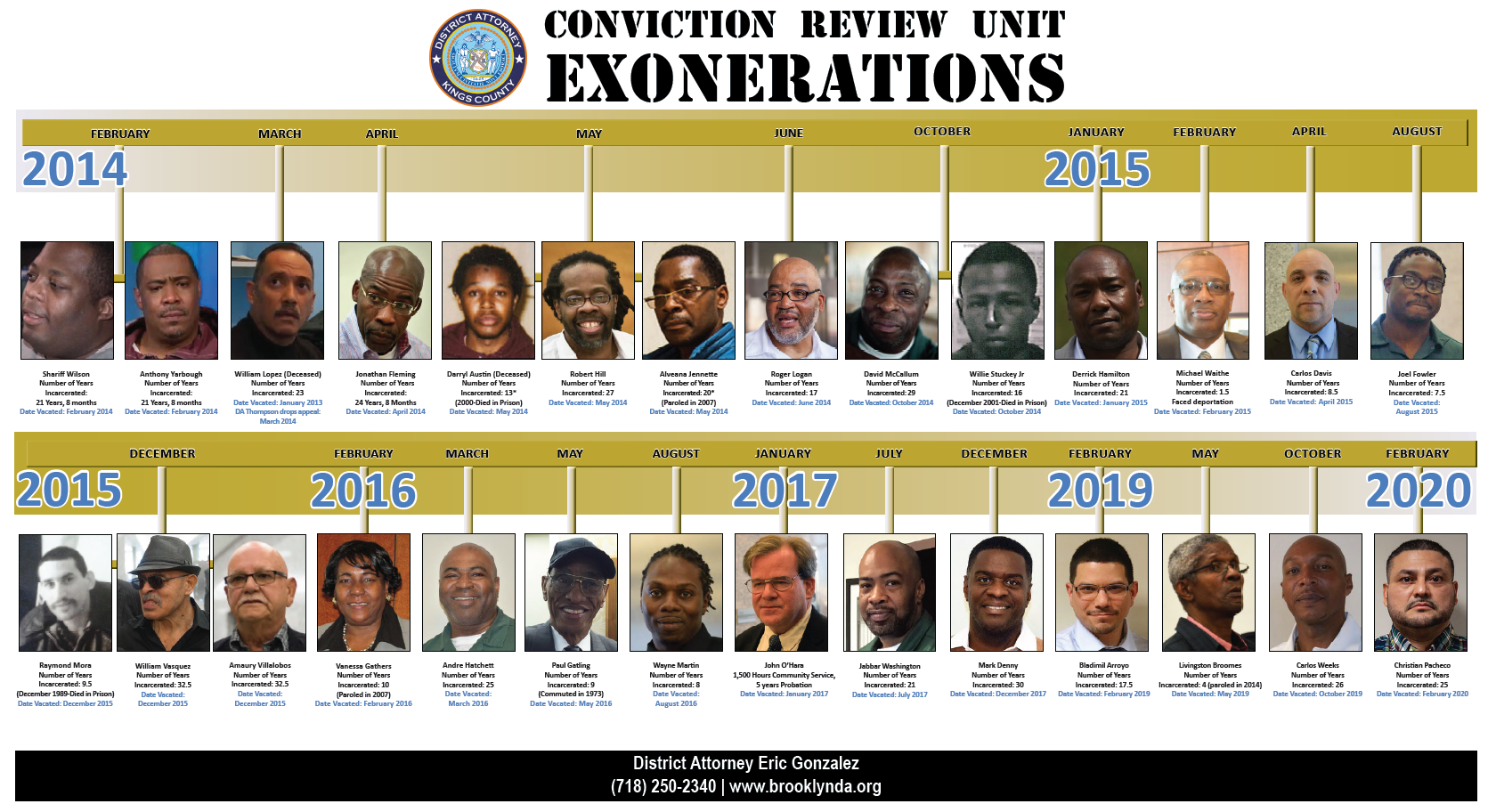 When the CRU investigates a potential wrongful conviction, they take a fresh look at all the evidence. They re-interview witnesses, consult with experts and use the most up-to-date science and technology to reevaluate the evidence. This includes forensic science like DNA, as well as social science research on issues like faulty eyewitness identification and false confessions.

The CRU’s work is critical for public safety. If the wrong person is sitting in prison for a serious violent crime, the real perpetrator may still be out there endangering the public.

Moreover, it offends our most basic sense of fairness, and corrodes public confidence in the justice system, for anyone to serve decades in prison for a crime they didn’t commit or because they did not get a fair trial. As of February 2020, Brooklyn’s CRU had exonerated 28 people, and the Unit has many more cases under review.

In addition to reviewing cases in Brooklyn, the attorneys from the CRU share their expertise with other prosecutors’ offices across the country.

Internally as well, CRU staff trains all new ADAs on the kinds of errors that most commonly lead to wrongful convictions.

If prosecutors ignore credible claims of wrongful conviction, it undermines public confidence in the justice system. Conversely, when the Brooklyn DA’s Office vigorously investigate claims of innocence, exonerates innocent people, admits mistakes, and apologizes, that sends a powerful message to the public that we can be trusted to pursue the truth, and not just guilty verdicts.

The Parole and Clemency Unit is charged with directing the Office’s participation in parole proceedings for incarcerated individuals through the analysis of individual cases and the development of policy positions that apply across various categories of cases. Those policy positions are:

Too often, the collateral consequences people suffer from past criminal convictions are devastating and disproportionate to the underlying offense. These consequences can undermine public safety, holding back people now living law-abiding, productive lives from the stability of employment, housing and other opportunities. And these consequences are often unfair for they do not represent the people they are today.

The Sealing Unit encourages and facilitates applications to seal criminal convictions under CPL 160.59, the New York State statute that went into effect in October 2017. The Unit initiated a collaboration with the Office of Court Administration, prosecutors and defense attorneys, to create a user-friendly application so that individuals can apply for sealing on their own. The Unit also works with the DA’s Office of Public Engagement to spread the word in our communities, to encourage more applications and to help resolve them expeditiously.