Below is the record DA Gonzalez made in Brooklyn Criminal Court today before Administrative Judge Michael Yavinsky:

“Your Honor, I would like to thank you and the Office of Court Administration for accommodating us today and for your ongoing partnership as we work on creating a more fair and equitable justice system in Brooklyn.

As the Court knows, my Office has stopped prosecuting the vast majority of marijuana possession and smoking cases, because I do not believe that pursuing those cases makes us safer, and because I recognize that the racial disparities in enforcement with respect to these offenses remained intractable.

In the past several months, my Office filed criminal complaints in only a small handful of marijuana possession cases, which represented the most egregious conduct, and we have also created a program to erase past convictions for these offenses, which I will address in a moment.

And today, in cooperation with The Legal Aid Society and Brooklyn Defender Services and with the assistance of the Court, I move to vacate warrants in the cases numbered one through 1,422 that were generated for a failure to return to court on a low-level marijuana offense under Penal Law Sections 221.10 or 221.05. I further move to dismiss the underlying cases corresponding to each of these warrants.

Therefore, I ask that these 1422 warrants be vacated. Back in September, I moved to vacate over 3,000 summons warrants generated from marijuana possession offenses and today’s action effectively clears the entire deck of warrants in Brooklyn that stemmed from this type of conduct.

I note that the majority of these warrants were issued to Black and Latino New Yorkers, and many are remnants of stop-and-frisk policies that harmed many of our communities and that the City has since abandoned. I believe we must do what we can to repair the harms done to the individuals and the communities that were targeted in well-meaning but misguided efforts of the past.

I strongly believe that clearing these misdemeanor warrants is what justice requires in these cases and corresponds with my mission of keeping Brooklyn safe and strengthening trust in the criminal justice system by ensuring fairness and equal justice for all.

Thank you, Your Honor.”

“Your Honor, as the Court is aware, my office created the first program of its kind to facilitate defendants filing petitions to erase their past marijuana convictions, to relieve them of various harms in individual cases.

For the reasons stated in the papers we filed today, my office consents to the coram nobis petitions of numbers 1 to 28 on the Court’s calendar.

Thank you, Your Honor.”

The District Attorney said that as we move away from prosecuting misdemeanor marijuana possession offenses, we cannot forget those who are still burdened by a past conviction for conduct we no longer prosecute. These convictions can create obstacles in securing employment, housing, educational grants and so on. Many of them stem from policies that resulted in intractable racial disparities in enforcement and fostered a sense of mistrust between law enforcement and the communities we serve.

District Attorney Gonzalez added, “These past convictions do not make us safe as they may hold back those who carry them from moving forward with their lives as contributing members of society.”

The ongoing program to erase marijuana possession convictions in Brooklyn is being held in partnerships with The Legal Aid Society and Brooklyn Defender Services. The motions that were erased today were collected during three events over the past three months in which individuals were invited to consult with a public defender and, if eligible, to fill out a motion asking to vacate their convictions.

With Governor Cuomo declaring marijuana legalization a legislative priority, the District Attorney said he believes that clearing past convictions must be part and parcel of any future legislation. The important step taken today sends a message that clearing people’s records is both feasible and essential in Brooklyn and throughout New York State.

The Brooklyn District Attorney reduced the prosecution of low-level marijuana possession offenses during 2018 by expanding its declination policy in the spring to include cases involving smoking in public, resulting in a 98% decline. The New York City Police Department changed its enforcing policies in September to use criminal summonses as a response to low-level marijuana offenses. District Attorney Gonzalez has stated that he believes the response should be civil summonses.

The number of Brooklyn prosecutions this year of misdemeanor marijuana possession is represented in the attached chart. 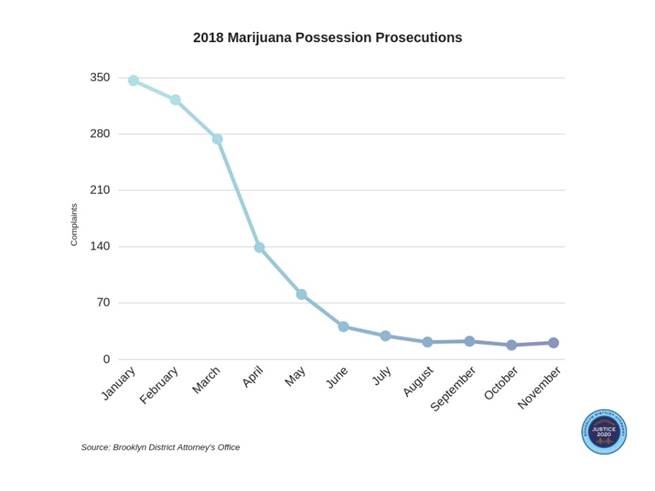