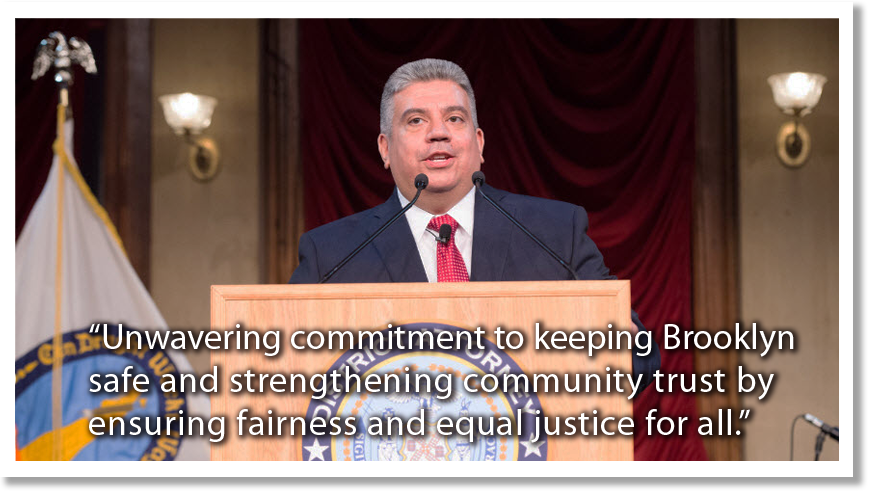 NOTICE: Service Changes and Resources in Response to COVID-19

The Brooklyn DA’s Office will continue to provide essential services necessary to keep Brooklyn safe while adopting social distancing practices to keep our employees and visitors safe and to slow the spread of COVID-19.

District Attorney Gonzalez said, “This successful takedown is part of our ongoing strategy to reduce shootings and senseless deaths by targeting the most violent offenders in our communities. A particularly troubling aspect of this case is that many of the defendants are teenagers, including an individual charged in connection with all three murders, allegedly committed when he was only 16. We must engage with our young people and help to keep them on the right path. They must learn that there is another way to live beyond the gang life and be given the tools and services to help them succeed. I am committed to doing both: aggressively prosecuting shooters and partnering with community-based groups that work with our youth to prevent future violence.”

Brooklyn District Attorney Eric Gonzalez, together with New York City Police Commissioner Dermot Shea, today announced that 14 alleged members of the Babiiez street gang are variously charged in an 81-count indictment with conspiracy to commit murder, possess weapons and related charges. The indictment includes charges related to 11 shootings that resulted in eight victims – six of whom were alleged rival gang members and two men who were not rivals.

Over 10,100 Letters Released Pursuant to Freedom of Information Law; The Letters, Which List Credibility Findings, are Routinely Provided to Defense Lawyers, as Constitutionally Required, When Police Officers Serve as Witnesses

District Attorney Gonzalez said, “This unprecedented release of disclosure letters should not be viewed as an attack on police officers, who are dedicated to keeping us all safe and work together with my Office in partnership every day. Its goal is to enhance transparency and strengthen trust in the criminal justice system, which relies on police witnesses to make criminal cases and requires the utmost integrity and credibility. These disclosures are required under the law, are being provided to defendants in court and should be part of the public record.”

District Attorney Gonzalez said, “Providing assistance to crime victims, especially those from marginalized and overlooked communities, is a crucial mission of my Office. That’s why I’m happy to announce KCDA Pride Connect, which will help us to provide the best support to members of Brooklyn’s LGBTQIA+ community. During Pride Month, we reaffirm our commitment to protect and competently serve everyone in our borough.”

District Attorney Gonzalez said, “We have no patience for hate or intolerance in Brooklyn and everyone, regardless of their race, ethnicity, sexual orientation, gender, or religion, should feel safe to walk the streets without fear of being senselessly and violently attacked. We will continue to work with our partners in the community to address this disturbing rise in anti-Asian hate crimes and bring the perpetrators of bias-motivated crimes to justice.”

The Cases, Dating Back to the 1970s, Remained Open Mostly Because of Warrants; About 240 Active Cases Previously Dismissed, Virtually Clearing the Docket in Brooklyn

Brooklyn District Attorney Eric Gonzalez today asked the Court to dismiss 3,578 marijuana cases that remained on the docket mostly because of open warrants. With this move, nearly all marijuana cases in Brooklyn have been dismissed. Since the State Legislature legalized marijuana in March, the DA’s Office dismissed about 240 active cases where marijuana was charged, while marijuana charges that are included in felony cases are being dismissed in the course of court proceedings.

Will Work Together in Impacted Communities on Street-Level Intervention, Alternatives to Incarceration, Victim Services, Clergy Care, Social Support Services and Mentorships; Will Provide Immediate Coordination and Responses to Gun Violence in the Impacted Precinct

Brooklyn District Attorney Eric Gonzalez, together with Pastor Gilford T. Monrose, President of the 67th Precinct Clergy Council, “The GodSquad,” today announced a new strategic partnership to help reduce gun violence in Brooklyn. Working together with community members, the NYPD and faith leaders, the DA’s Office and Clergy Councils will endeavor to provide support and guidance to at-risk youth, and offer assistance in several high-crime precincts to strengthen trust between communities and law enforcement as part of a holistic approach to reducing crime and breaking the recurring cycle of violence and criminal justice involvement.

CBS New York: Brooklyn DA Teaming Up With Local Clergy With Eyes On Putting An End To Recent Rash Of Gun Violence

262 Warrants Connected to Offenses That are No Longer Prosecuted Dismissed in First Phase; DA Calls on Legislature to Repeal Loitering Law and Expunge Prostitution Convictions

District Attorney Gonzalez said, “Vacating these warrants and dismissing these cases is consistent with my view that those who engage in these activities need to be offered assistance, not criminally prosecuted. I am also calling on Albany to repeal the law that prohibits what is known as loitering for purposes of prostitution, because of the vagueness of the law, the stark racial inequalities in its enforcement, and the disproportionate harm that enforcement of the law has caused to vulnerable trans women in our community. Additionally, I am asking the legislature to expunge past prostitution convictions so they will not hold people back from opportunities for a better future.”

Buzzfeed News: More Than 1,000 Open Prostitution Cases In Brooklyn Are Going To Be Wiped From The Files

Adds Resources to Support Investigations of Traffic Fatalities from Their Outset; Will Provide Assistance to Victims and Liaise with Advocates and Lawmakers to Improve Road Safety

Brooklyn District Attorney Eric Gonzalez announced the creation of a Street Safety Bureau to assist in police investigations of traffic violence cases, with emphasis on protecting bicyclists and pedestrians, respond to scenes of serious collisions in real time and coordinate support services for victims and their families. Bureau members will also work directly with legislators to assist in drafting and revising bills to combat vehicular violence, attend Safety Board meetings and host regular meetings with traffic safety advocates, among other duties.

District Attorney Gonzalez said, “For more than three years, I have been calling on ICE to stop its unconscionable practice of conducting immigration raids in and around our courthouses because they jeopardize public safety. But the Trump Administration only escalated this unlawful and dangerous tactic, creating a chilling effect in immigrant communities, which discouraged victims and witnesses from reporting crimes and participating in the legal process. I joined Attorney General James in filing a federal lawsuit to bring this practice to an end, so I am extremely gratified that U.S. District Judge Rakoff today agreed and enjoined ICE from making those arrests, finding that it was a violation of longstanding practices, of their own policies, and interfered with the administration of justice. Allowing every resident equal access to our justice system is crucially important and necessary for maintaining fairness and public safety.”

Four Men, Including MTA Subway Conductor, Indicted for Trafficking Guns Purchased in the South to Sell on Brooklyn Streets

Brooklyn District Attorney Eric Gonzalez, together with New York City Police Commissioner Dermot Shea, announced the indictment of an alleged gun trafficking ring that purchased firearms in South Carolina and Virginia that were then transported on the Iron Pipeline and destined to be sold on the streets of Brooklyn.

District Attorney Gonzalez said, “Brooklyn’s valuable real estate market continues to be an attractive target for fraudsters willing to deceive homeowners. These victims, who trusted the defendant to help them avoid foreclosure, instead allegedly had their homes stolen by him and were left facing financial ruin. I urge anyone considering selling their property to be prudent about with whom they do business. Be wary of any unsolicited offers of help with your property and do not sign any documents unless you consult with an independently retained attorney.”

District Attorney Gonzalez said, “I am very proud of Brooklyn’s Conviction Review Unit and the commitment to justice it represents. With this Report, we hope to share the methods, analyses and findings of the CRU with others around the country who are engaged in this critical work, and with the public at large. Wrongful convictions devastate lives – each one of the 25 cases in this Report is its own tragedy – and strike at the heart of our criminal justice system.”

426 Years: An Examination of 25 Wrongful Convictions in Brooklyn, New York

Initiatives Will Include Significant Changes to the Office’s Parole Policies and Robust Participation in Parole Proceedings, Including Recommending Release After Defendants Serve the Minimum Sentence as Default Starting Position for Cases That Ended in Guilty Plea

Brooklyn District Attorney Eric Gonzalez today announced the creation of the first dedicated Post-Conviction Justice Bureau in the country. It will be anchored by the nationally recognized Conviction Review Unit and include two new Units: A Parole and Clemency Unit charged with implementing new policies governing the Office’s participation in parole and clemency proceedings for incarcerated individuals, and a Sealing Unit to encourage and facilitate applications to seal criminal convictions.

The City: Brooklyn DA Vows – I Won’t Fight Parole in Most Cases

Arts-Based Educational Course and Other Programming are Offered In Lieu of Prosecution; Cases Get Dismissed Upon Completion and Without Court Appearance

District Attorney Gonzalez said, “Project Reset aligns with my commitment to reduce our reliance on convictions and incarceration while still holding offenders accountable. This program addresses the conduct of those who commit misdemeanor offenses and confronts the consequences of their actions in a more meaningful way than traditional court sanctions. I am especially proud that we have partnered with the Brooklyn Museum because involving our local communities and Brooklyn’s incredible cultural institutions as partners in justice is one of my goals as we strive to strengthen fairness and trust. This partnership helps harness the transformative power of art as a response to low-level crimes. With the forthcoming expansion of DAT arrests under the new criminal justice reform law taking effect next year, this program will help us handle misdemeanors more efficiently and equitably while reducing the footprint of the criminal justice system.”

District Attorney Gonzalez said, “I am committed to holding offenders accountable in ways that are meaningful because putting individuals on a positive track reduces recidivism and promotes public safety. I’ve now expanded this approach to court-mandated community service. Our new Community Resource Empowerment Center, which embodies the core principals of my Justice 2020 plan, provides an array of opportunities for people to better their lives and end their criminal cases with tools that would help them succeed. This will help keep Brooklyn safe and strengthen community trust.”

District Attorney Eric Gonzalez said, “Justice 2020 will reshape the Brooklyn District Attorney’s office into a model of progressive prosecution that keeps the public safe and strengthens community trust by ensuring fairness and equal justice for all. We will move away from over-reliance on incarceration, engage all stakeholders as partners in justice, focus resources on those who do the most harm and make my Office more strategic and mission-driven. I am deeply grateful to all of the people, many of whom have personal experience within the system – who helped develop this comprehensive blueprint, which we have already begun implementing. As we continue to reap the benefits of historic decreases in crime here in Brooklyn and across the country, now is the time to focus on reforming injustices in the system that have led to over-reliance on incarceration and a lack of trust in the criminal justice system. In many cases, incarceration does not keep us safer, and I am committed to shifting to ways of holding people accountable and increasing public safety that don’t rely on incarceration as the default option.”

How to Protect Your Property From Deed Fraud

Construction Company Operator, Foreperson and Engineer Indicted for Manslaughter in Death of Laborer