Murders Dropped Below 100 for the First Time Since Record-Keeping Began;
Admissions to Rikers Island on Misdemeanor Cases Declined by Over 43%

Brooklyn District Attorney Eric Gonzalez today announced that 2018 will end with the fewest number of homicides in Brooklyn since record-keeping began, beating last year’s historic low and dropping below 100 for the first time. At the same time, the number of misdemeanor defendants held in Rikers on bail declined by over 43% compared to 2017; the number of prosecutions of marijuana possession offenses was slashed by 98%; and the number of prosecutions of low-level possession of a controlled substance dropped by about 10%, with 150 individuals having their cases dismissed without ever appearing in court under the new Brooklyn CLEAR diversion program.

District Attorney Gonzalez said, “In Brooklyn, we are leading the way in implementing initiatives that strengthen trust in the criminal justice system while keeping communities safe. Working with the NYPD, we are continuing to see declines in most crimes, with another historic low in homicides. And we are showing our commitment to enhancing fairness and equity by reducing reliance on incarceration and offering more opportunities for diversion. I look forward to achieving additional meaningful reforms in the coming year as we execute my Justice 2020 action plan and build a truly progressive and modern District Attorney’s Office.”

The District Attorney said that 97 murders were recorded in Brooklyn to date in 2018, 13 fewer than last year’s low of 110 (down 11.8%).  This is the first time when fewer than 100 murders took place in the borough annually since record-keeping began. The most significant declines were in Coney Island (60th Precinct), where no murders were committed, compared to eight in 2017; East Flatbush (67th Precinct), which experienced a 65% decrease, from 17 to six; and East New York (75th Precinct), with six homicides compared to 11 the year before, down 45%. 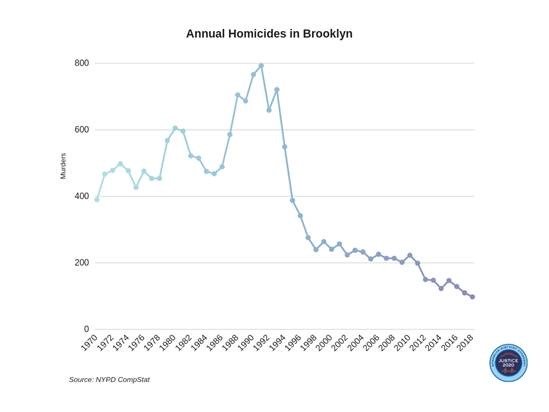 Detentions on Rikers Island on misdemeanor cases also continued to go down in keeping with a trend that started after District Attorney Gonzalez put in place a new bail policy in April 2017, under which release without bail became the District Attorney’s Office’s default position for most misdemeanors. Monthly admissions to jail on these offenses averaged 96.8 people in 2018, down 43.3% compared to the year before and down nearly 58% since the bail policy was implemented (the monthly average stood at 228.6 in 2016 and 171.2 in 2017). 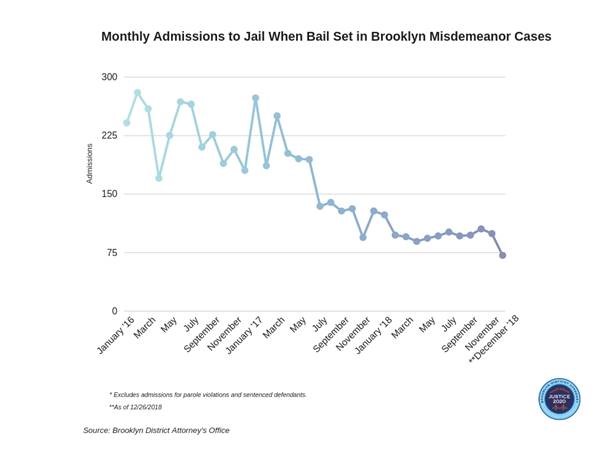 Misdemeanor possession cases of other narcotics also fell in Brooklyn over the past year with the number of criminal complaints declining by 9.6%. Much of the drop can be attributed to Brooklyn CLEAR, which started as a pilot in February and expanded in September to the entire borough. Under CLEAR, individuals arrested on misdemeanor charges of criminal possession of a controlled substance in the seventh degree have the opportunity to resolve their cases by receiving services rather than appearing in court if they comply with independent assessment-based recommendations for 30 days. So far, 150 people had their cases dismissed before ever appearing in court, with 44 others still enrolled in the program. A total of 219 naloxone kits that reverse the effects of opioid overdoses were distributed by peer counselors as part of the program.

Early in 2019, District Attorney Gonzalez will release his entire Justice 2020 action plan, which consists of additional transformative changes to the way his Office processes cases, partners with the community, targets drivers of crime and evaluates data and staff performance, among other reforms. Some of the initiatives planned for the coming year include collaborations with criminal justice experts and academics, new approaches to community service, expanded programs for pre-charge and pre-arraignment diversion with low-threshold participation, improvements in discovery policies and new trainings for prosecutors.